A glamorous evening ahead of the AKRON WTA FINALS GUADALAJARA 2021 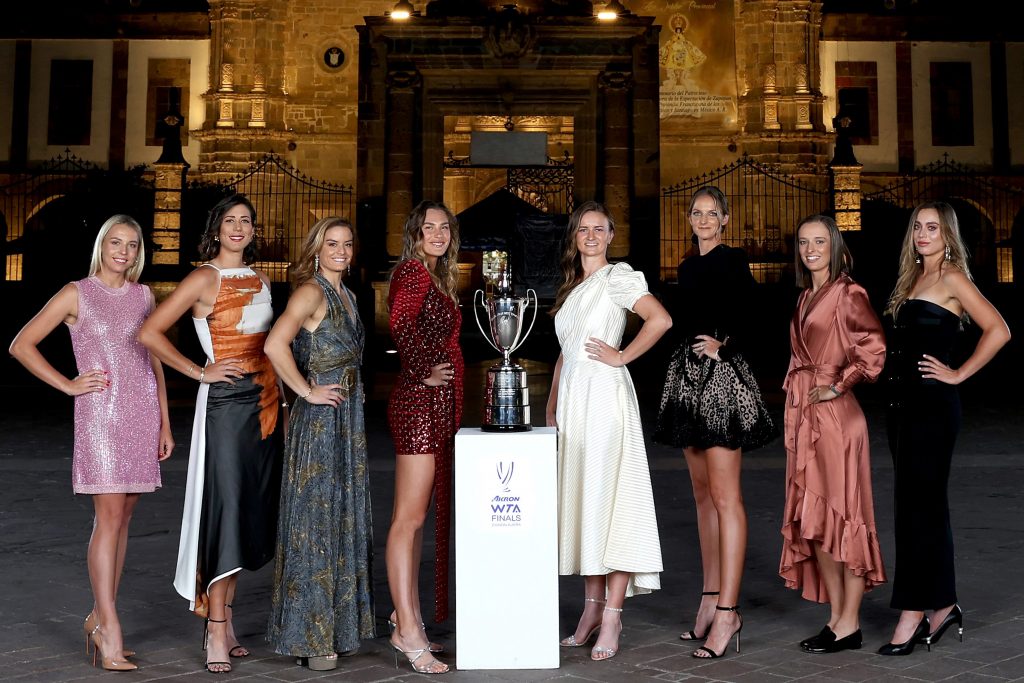 It was a night of pure elegance: all the tennis players competing in the AKRON WTA Finals Guadalajara 2021 – which will be played from November 10 to 17 at the Pan-American Tennis Complex – walked the red carpet at the Zapopan City Hall. This type of glamour, rarely seen by fans, showed a different side of themselves this evening.

The eight best singles players and the eight best doubles teams posed in their glamourous gowns. It was a magical night in which the players were able to stay away from their rackets for a few hours.

The Spaniard Garbiñe Muguruza, the Belarusian Aryna Sabalenka, and the Czech Katerina Siniakova stood out this evening with their charisma and natural grace on the carpet.

Muguruza, who was born in Venezuela, said she was excited to be playing in Mexico for the third time; she previously played in Monterrey and Acapulco. Muguruza acknowledged that due to her Latin American roots, she has always been treated wonderfully by the fans; she hopes it will be the same this time and that she can win another title in Mexico as she has already done twice in the Sultana del Norte.

Her compatriot, Paula Badosa, told the media that being in Mexico for a WTA Finals is incredible considering it is in Latin America, which she considers to almost be a second home. Badosa said that she is ready to go out and play with a very special motivation: as of this Monday, she reached the top 10 in the WTA rankings for the first time. “It is very exciting, a dream come true, because since I was little, I always thought I was among the best in the world. I always had faith and hope, it is important to never lose it.”

The Czech Barbora Krejcikova, the last player to arrive in Perla Tapatia due to having competed at the Billie Jean King Cup in her home country, the Czech Republic, pointed out that her season has been spectacular. She won the singles and doubles titles at Roland Garros, and the Olympic gold medal in doubles at the Tokyo 2020 Games; Krejcikova said that she would like to end her incredible season on a high note.

Several of the players shared their love for Mexican food, especially the famous tacos or guacamole. The American Nicole Melichar-Martínez said that she likes the spicy food. Melichar-Martínez also told the media that she is very happy to be in Mexico and hopes to play well in this event, the best that she possibly can alongside her partner.

As for the Mexican Giuliana Olmos, she said that she feels good going into the tournament, especially after having just won a tournament in Texas. “With Sharon Fichman we have done very well this year, we get along very well on and off the court, we enjoy it, we are very excited and ready to play,” Olmos said. Meanwhile, the Canadian Sharon Fichman added, “I love being here in Mexico. I’ve been here a few times. We went on the Tequila Tour in the town of Tequila, it has been very exciting. I really like being here in Mexico with Giuliana.”

Following tonight’s festivities, the players are officially ready to start their title search at the AKRON WTA Finals Guadalajara 2021.