Shibahara and Aoyama are One Step Closer to the Semifinals 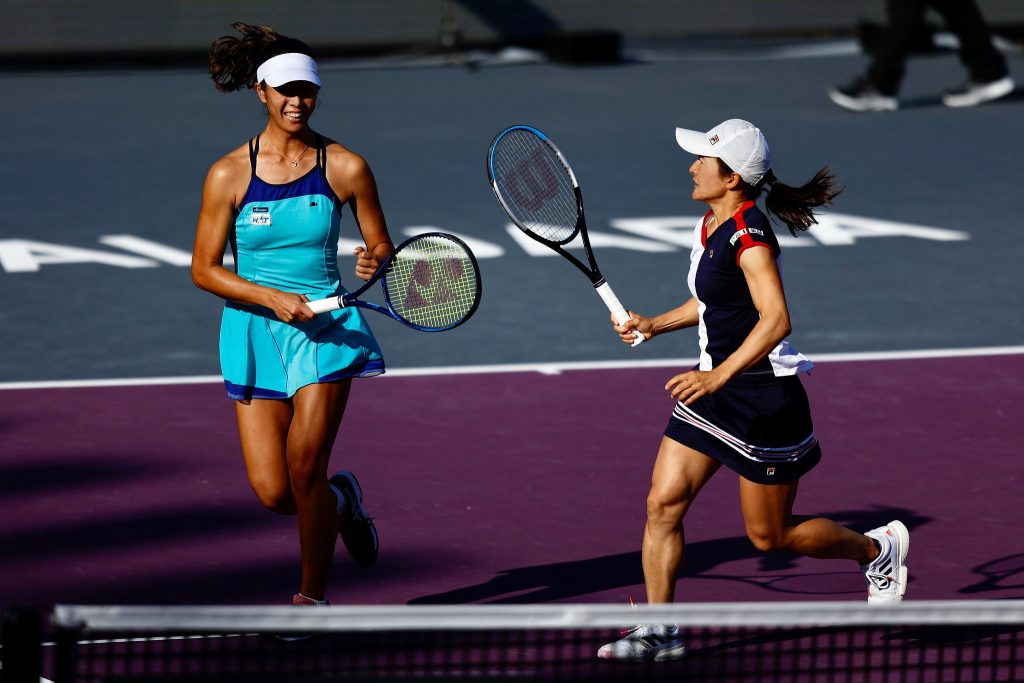 Guadalajara, Jalisco, November 12, 2021.- The Japanese pair Shuko Aoyama and Ena Shibahara, got their second victory at the AKRON WTA Finals 2021 as part of the Tenochtitlán group, after defeating the fourth seeds American Nicole Melichar-Martínez and the Dutch Demi Schuurs 6-4 7-6 (5); it took them 1 hour and 41 minutes to close the match on their ninth match point.

The second seeded Japanese pair have practically secured their place in the semifinals of the tournament after scoring their third victory of the year over Melichar- Martinez and Schuurs, where they also defeated them in Yarra Valley and Eastbourne.

“I am very happy, it was a difficult match, they have great defense, but fortunately for us, we were able to win,” said a beaming Shihabara who praised the fans in Guadalajara for encouraging the players a lot. “Here, people inject a lot of energy into you, it’s very good to be playing here.”

Shibahara and Aoyama are looking for their sixth title of the season; this year, they’ve already won the tournaments in Abu Dhabi, Yarra Valley Classic, Miami, Eastbourne and Cleveland. They also reached the semifinals in Rome, Wimbledon and Indian Wells.

The match did not start great for the Japanese, who could not hold their service games in their first two games (1 and 3) and Melichar-Martínez/Schuurs duo had a 3-0 lead. In the next game they were able to recover one of the breaks.

Melichar-Martínez/Schuurs let the set slip in the eighth game on their serve. Aoyama and Shibahara began to make fewer mistakes and in the ninth game, they held their serve to get the lead in the set and eventually got the break in the tenth game to close the first set.

In the second set, Shibahara got into trouble with her serve, and went dow 0- 40. The Japanese duo ended up saving two break points, but on the third, their opponents did not they waste the opportunity and won the break.

The Japanese ultimately recovered in the fourth game on Schuur’s serve. Both pairs held their serves in the following games. In the tenth game, with Melichar serving, the Japanese let go of their two first match points. Then they had three more opportunities in the 13th game but were not able to close it until the tie break. Finally, on their ninth chance, they sealed the win.

Aoyama and Shibahara are waiting for several different combinations and matches to conclude in order to determine their standing in the Tenochtitlán group.