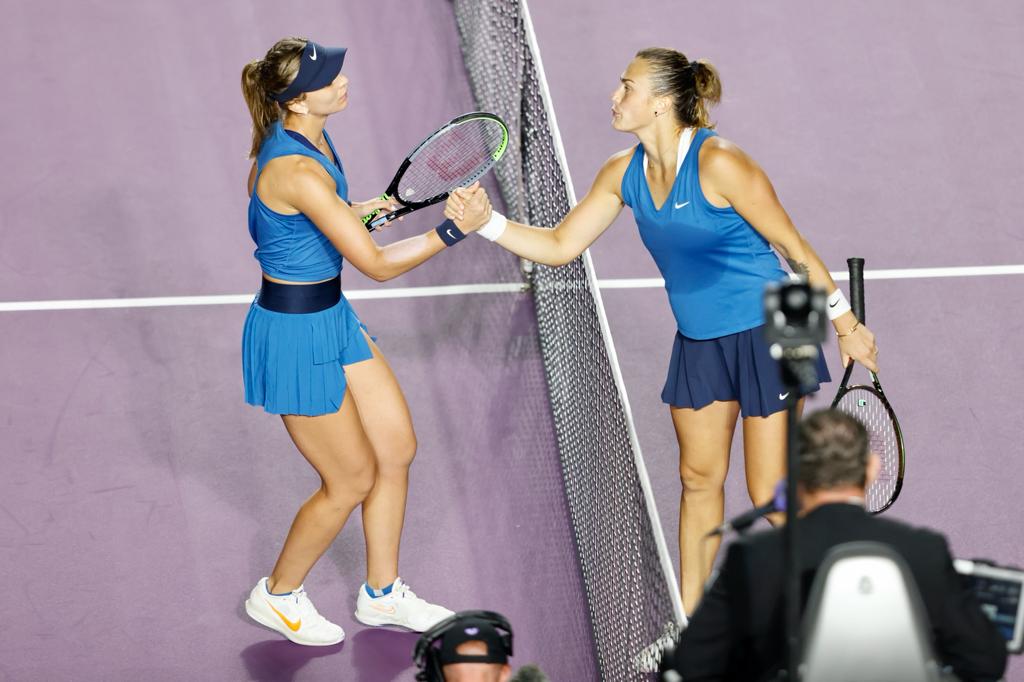 Guadalajara, Jalisco. November 10, 2021.- The second day of matches at the AKRON WTA Finals Guadalajara 2021, will be a battle between the number one seed, Aryna Sabalenka from Belarus, who will play against Paula Badosa of Spain.

The match – which is a part of the Chichén Itzá group – is scheduled for 7:30 pm at the Akron Stadium of the Pan-American Tennis Complex. This will be just the second meeting between the two players on the WTA tour. So far, their first and only match went to Badosa at the tournament in Cincinnati; she won in a three set match (5-7, 6-2, 7-6) to eliminate Sabalenka in the second round. Badosa went on to reach the quarterfinals of the event.

Both players – who are 23-years-old – will be in search of their third title this season. The Belarusian, the number two ranked player in the world won the tournaments in Abu Dhabi and Madrid; total, she has won 10 titles throughout her career. With the withdraw of Ashleigh Barty from Australia, Sabalenka is considered the favorite to win the prestigious, end of the year event.

“Well, you have to deal with the pressure. I think I’m doing fine. I’m very happy to be here, especially at the top position. I couldn’t imagine that one day I would be at the top of the WTA Finals. For me this it is something amazing and incredible. I’m really very happy with my level of tennis this year, and very proud of my team. I hope I can play my best here,” said the Belarussian player, who played in Mexico only as a junior, never as a professional.

“The first day that I arrived here, I was surprised that I couldn’t control anything. I had to play around with the strings for a bit until I found the tension. Just by practicing every day, I feel better about the altitude and the conditions here. Hopefully I’ll be able to play my best in this first match.”

As for Paula Badosa, who will make her debut in a WTA Finals this year, won two tournaments in her career:  Belgrade vs the Croatian Ana Konjuh and Indian Wells vs Victoria Azarenka. During her spectacular 2021 season, she also reached the semifinals at the tournaments in Charleston and Madrid. Now in Guadalajara, Badosa who is about to celebrate her 24th birthday on November 15th, is ready to give it her all.

“I knew I was going to have a difficult group. They are all incredible players. I know that I’ll be opening the tournament against Aryna who is number two in the world and one of the favorites here. I know it will be difficult, as all of them are playing well. The others in the group can adapt quite well at altitude. It will be very difficult, but I am ready for it,” shared the Iberian tennis player that has won 41 matches this season and lost 15 matches.

“I arrived early to have several days to adapt. The balls fly a lot. It’s not like Indian Wells, it is very difficult to have control of the ball here. I am trying to adapt but it is difficult. The good thing is the conditions are the same for all of us. Now, I am here with my family. I have good people around me to just enjoy. I think it will be the last tournament of the year. I had a very intense season and now I want to be able to work hard and enjoy myself. After this tournament, I need to calm down a little for at least a week to reflect on everything I have and what has happened,” concluded the Indian Wells champion.