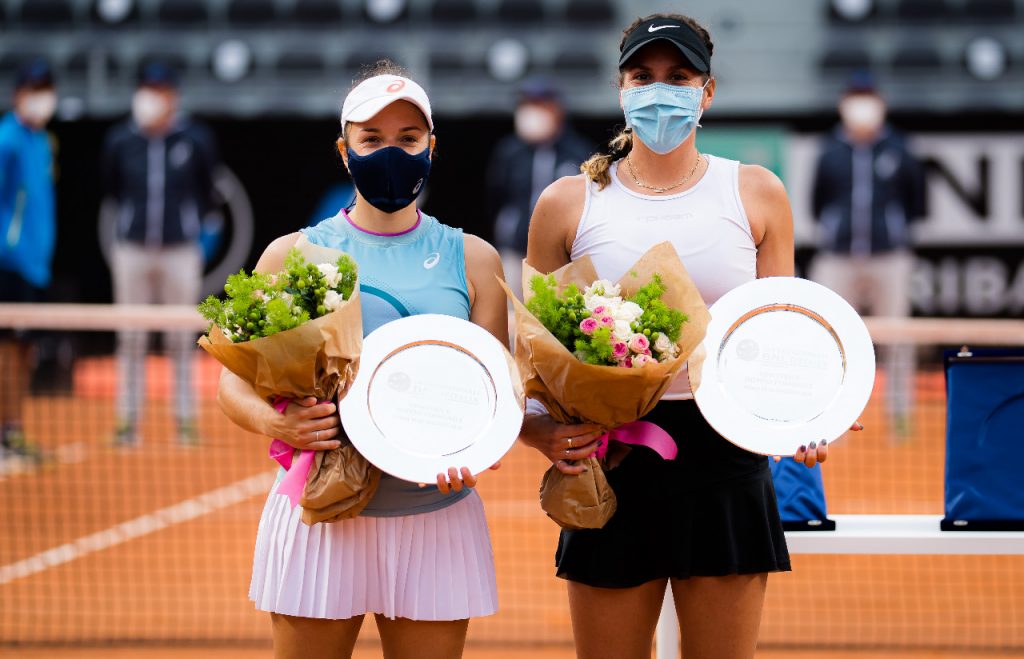 ST. PETERSBURG, FL. – Today, the WTA announced that the doubles draw for the AKRON WTA Finals Guadalajara is set. Alexa Guarachi and Desirae Krawczyk, Darija Jurak and Andreja Klepac, and lastly Sharon Fichman and Giuliana Olmos were the last teams to secure their spots at the year-end Finals.

The pairings of Coco Gauff and Caty McNally, Gabriela Dabrowski and Luisa Stefani also qualified, however, they will not be participating at this year’s WTA Finals. This allowed for Fichman and Olmos to qualify in Guadalajara and compete for the Martina Navratilova Doubles Trophy at the prestigious WTA Finals.

Alexa Guarachi and Desirae Krawczyk will be making their debuts at the WTA Finals. Guarachi becomes the first Chilean to qualify in the history of the tournament. The pair won two titles this season: first the Adelaide International, then at the Internationaux de Strasbourg.

The Chilean-American duo also reached the semifinals of the US Open, the Credit One Charleston Open, and the Emilia-Romagna Open. Both players have reached their career-high rankings this season at No.11 and No.17, respectively.

Croatia’s Darija Jurak qualified for the year-end final for the first time in her career; her partner, Andreja Klepac of Slovenia, will make her third appearance at the WTA Finals (she competed in Singapore in 2017 and 2018 with Maria José Martínez Sánchez).

In 2021, Jurak and Klepac captured two out of four finals. They won the Mubadala Silicon Valley Classic in San Jose and then reached the final of the National Bank Open in Montreal the following week. They notched their second title this year at the Bad Homburg Open presented by Engel & Volkers and were finalists at the Emilia-Romagna Open in Parma. Additionally, they reached the semifinals of the Chicago Fall Tennis Classic and the quarterfinals at Roland Garros.

Sharon Fichman and Giuliana Olmos will also make their debut appearance at the WTA Finals this year after a standout season; this includes the title in Rome at the Internazionali BNL d’Italia where they defeated two teams who are also in Guadalajara draw this year: Hsieh/Mertens and Aoyama/Shibahara.

The Canadian-Mexican duo also made the semifinals at the bett1open in Berlin, the quarterfinals at the Australian Open, Porsche Tennis Grand Prix in Stuttgart and Viking International in Eastbourne. Finally, they reached the Round of 16 at Roland Garros and The Championships, Wimbledon.

Raluca Olaru from Romania and Nadiia Kichenok from Ukraine will be the alternate doubles team in Quadalajara. The duo reached four finals in 2021, won the titles at the St. Petersburg Ladies Trophy and WTA Chicago Women’s Open and were finalists at the Bad Homburg Open presented by Engel & Volkers and the VTB Kremlin Cup in Moscow.

Guadalajara will host the season-ending tournament for the first and only time this year. The

event will return to its official headquarters in Shenzhen, China in 2022.

the WTA Finals based on their results at all 51 WTA tournaments and the 4 Grand Slams. The

tournament is played in a round-robin format. The singles champion will lift the Billie Jean King