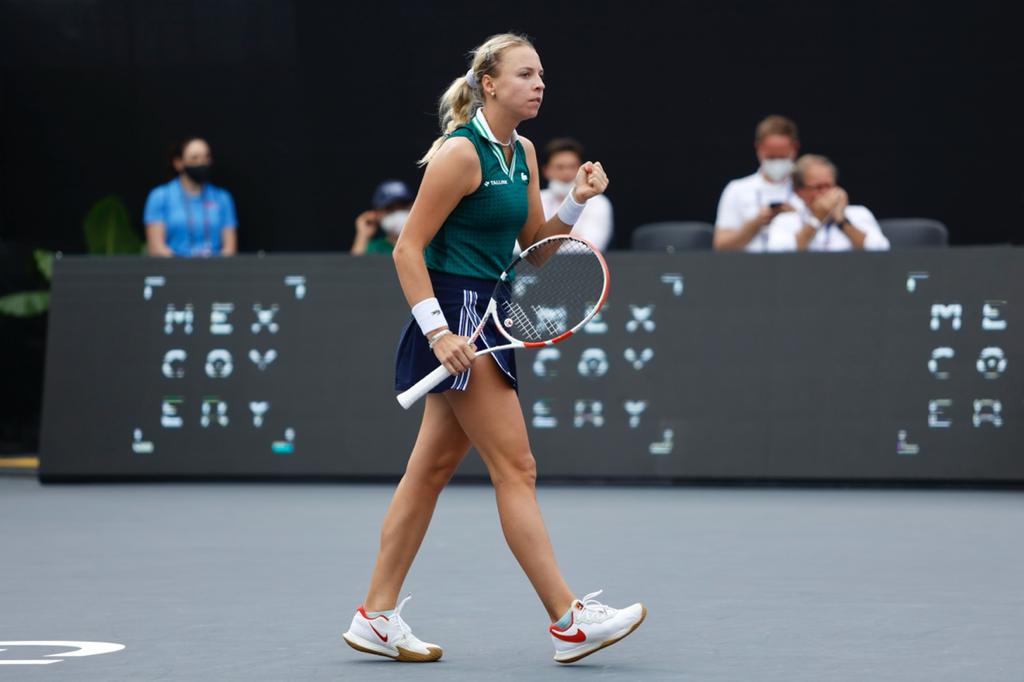 Guadalajara, Jalisco, November 10, 2021.- Estonian Anett Kontaveit scored her first win at the AKRON WTA Finals, with a victory over the Czech Barbora Krejcikova. This was the opening match of the event – a part of the Teotihuacán group – and was played in the stadium of the Pan-American Complex. Kontaveit won 6-3, 6-4, in 1 hour and 15 minutes which proves that she is still on a roll after just winning the titles in Moscow and Cluj-Napoca.

Krejcikova – the No. 2 seed at the AKRON WTA Finals – is  competing in both the singles and doubles events. In singles, she has never played against Kontaveit. Her only experience against an Estonian player was in 2020, when she beat Kaia Kanepi. Anett concluded the match with eight aces and three double faults. The Estonian now has won a whopping 36 matches won on hard court this year.

Anett Kontaveit played very confidently, especially during her service games; as for Krejcikova, it was difficult for her to find her rhythm.

Kontaveit got her first break in the fourth game to go 3-1 and straight away kept the momentum to lead 4-1. Krejcikova kept up in the first set but could not generate a break opportunity on Kontaveit’s serve. In the seventh game, the Estonia got the break to lead 5-2 and then secured the ninth game with 6-3, in just 30 minutes of play.

As for the second set, things started off badly for Krejcikova. The Czech lost her serve in the first game 1, which gave Kontaveit more security. In the fourth game, she hit three aces to  secure a 3-1 lead.

The Czech tried to recover, and in the tenth game, with Kontaveit on serve, she went 15-30 with a two-handed backhand return winner, but the next point, she made a mistake so the break point could not be achieved. Kontaveit did not waste time and eventually closed out the match.

With this first win, Kontaveit got 125 points and won $70,000. This victory allows her to put her record against top-ranked players at 10-10 this season.

Krejcikova will look to bounce back in her next match to still have the option to advance to the semifinals.