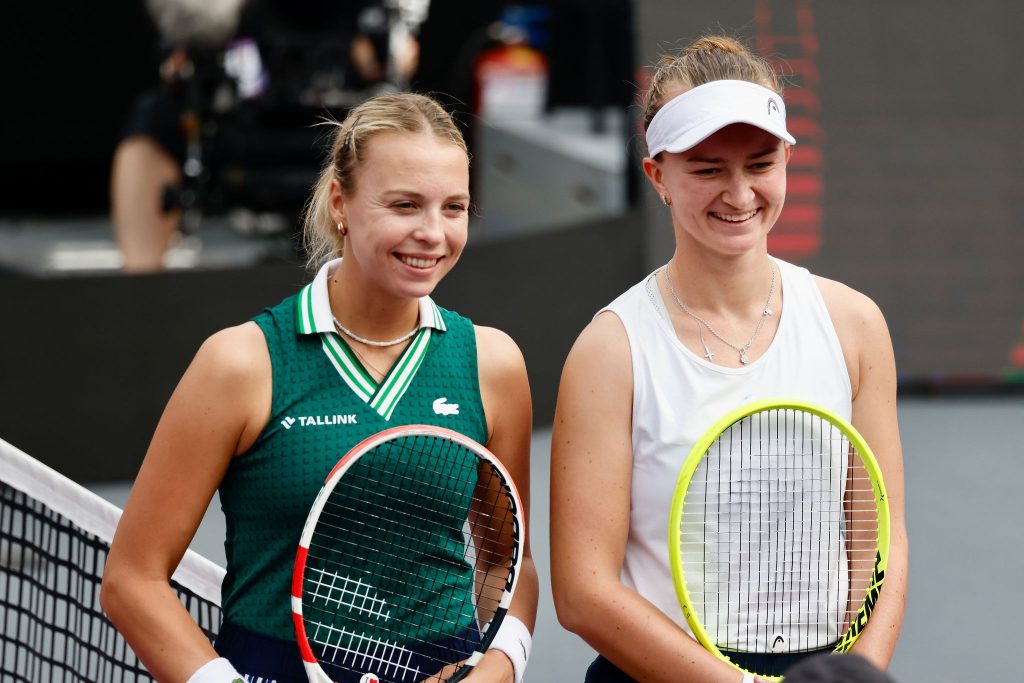 Guadalajara, Jalisco. November 9, 2021.- This Wednesday the event will begin at the AKRON WTA Finals Guadalajara 2021 located at the Akron Stadium of the Complex Pan American Tennis Championship in Zapopan.

The first two singles matches will be played within the Teotihuacán group. Starting at 2:00 pm local time, the Czech Barbora Krejcikova will face the Estonian Anett Kontaveit. Then, under the lights starting at 7:30 pm, the Spaniard Garbiñe Muguruza will play against the Czech Karolina Pliskova; this will be quite the duel considering they are both former world number one.

Krejcikova, No. 3 in the race to the Finals, and Kontaveit, No. 8, will face each other for the first time in their professional careers. It is a matchup between two of the most successful players on tour this season. Krejcikova has won three titles, which includes: the Grand Slam Roland Garros, and the WTA tournaments in Strasbourg, Prague, and a final in Dubai.

“I think we will see when the matches start if it has worked in my favor. I’m really trying to focus on what I have to do here. I have played so many matches but I don’t think it’s a bad thing. I like it. I don’t know how other players would feel about it. For me, I think it’s a good position,” she explained.

“For now, I want to say that I am very proud to represent my country wherever I go. Of course, it is a great achievement to be the first Estonian player to be in the top 10. I am very happy to see that there are so many people supporting me at home, people who are excited for me, watching my matches, regardless of what time it is, and so on. It feels great,” Kontaveit concluded.

This Wednesday, after the opening ceremony, which is scheduled for the 7:00 p.m., a tall duel will begin. Karolina Pliskova is 1.86 meters, and Garbiñe Muguruza is 1.82 meters. The pair have a long history of competing against other. The Czech has won 8 of the 10 times that they have faced each other. Pliskova was a finalist in three tournaments this season, including Wimbledon. She is ranked fourth in the WTA, while Muguruza is number 5 and won two trophies this year in Dubai and Chicago. Muguruza is coached by Conchita Martínez.

Both players, who are 28-years-old, already know what it feels like to be at the top of the world ranking; the Czech was ranked number one in July 2017, while Muguruza was number one in September 2017. The last time they played against each other was at the 2019 Australian Open, with a victory for Pliskova in two sets.

“Of course we play a lot, but in fact, it has been two or three years since we played. The last time, I was with Conchita and now she is Conchita. It is a different situation. I don’t think this should have any effect on the match. I know how she plays, and I am sure she knows how I play. It’s going to be difficult; I don’t know how the game will go in these conditions. In general, there are quite a few errors with how the balls fly, but you must be patient in order to not lose your nerves. It’s going to be the first match, hopefully it’s a good one,” said Pliskova, who noted that she is not yet fully acclimated to the altitude in Guadalajara.

“I’ve been here a couple of days, of course, getting used to the conditions. They are very different from the ones that we are used to. I am not playing perfect, but I think it’s not going to be about that. I’m better in the matches than in practice,” added Pliskova.

As for Garbiñe Muguruza, she said that she is playing in the most difficult group. “Well, I feel that the players who are in my group have more experience. I know that Karolina is more experienced playing the Finals. I feel like Krejcikova is having a great year and winning a Major. Kontaveit, she has a lot of confidence. This will be a complicated group. The other is also tough, of course. I will have to play well and get to the semifinal, that’s the goal of the round-robin,” said the Spaniard, who, although she has already won two tournaments in Mexico did it in different conditions.

“Well, I have not experienced this altitude before. I have played well in Mexico, although under different conditions. But I am looking forward, improving every da. Yes, I’ve already been here before, it’s a great feeling to be in Mexico and have the Mexican crowd supporting me on the court. Hopefully tomorrow I can play my best tennis out there,” concluded Muguruza, who also confessed that she was pleasantly surprised when they announced that Guadalajara would be the venue for the tournament after it was moved from China.