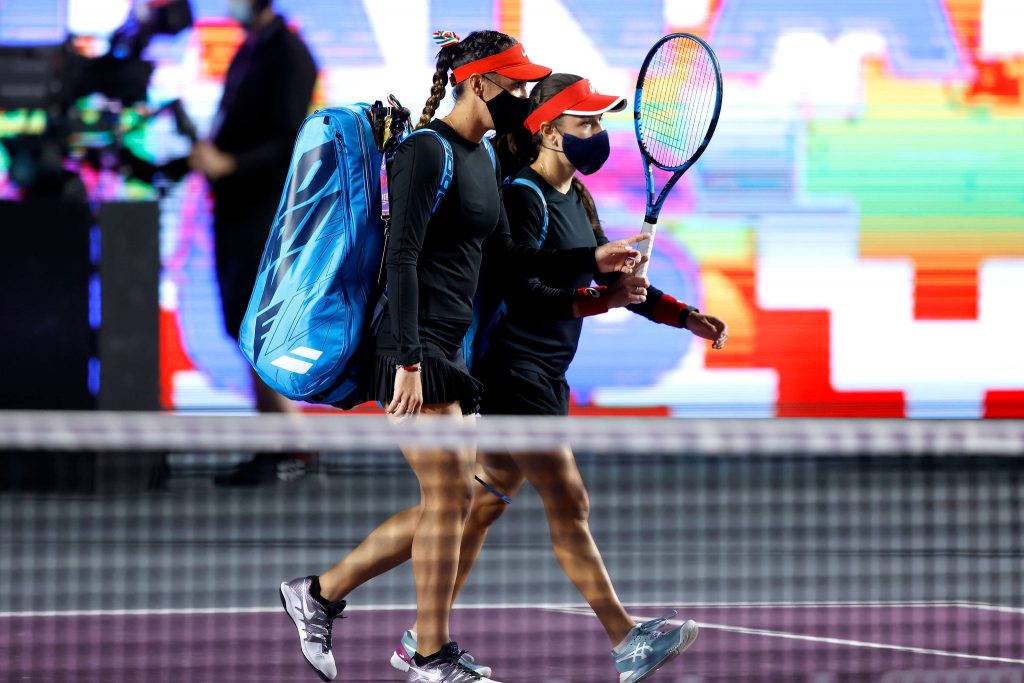 Guadalajara, Jalisco, November 11, 2021.- Mexican Giuliana Olmos made her AKRON WTA Finals doubles debut as part of the group El Tajín alongside the Canadian Sharon Fichman. The pair lost to the Czechs Barbora Krejcikova and Katerina Siniakova, who they claimed their first victory of the tournament with a 6-4, 6-1 win.

Olmos and Fichman began their 2021 adventure at the Abu Dhabi tournament and just a few weeks later, they reached the final of the Australian Open Grand Slam where they were defeated by Krejcikova and Siniakova. Shortly after, they ended up capturing the title in Rome, which they entered as alternates where they managed to beat the teams of Cori Gauff and Caty McNally and Gabriela Dabrowski and Luisa Stefani.

Giuliana made history by stepping on the court of the Pan-American Complex as the first Mexican tennis player to participate in the tournament. She arrived with maximum motivation, with the aim of enjoying the achievement of competing against the best in the world. Although the result was not as she hoped, the Mexican was not discouraged.

“I still feel that it was something historic, that being here is an achievement. The loss does not take anything away from that. The other players played very well. Now we have a day off and we are going to focus on what we have to improve on for Saturday’s match,” Giuliana said.

Olmos was in charge of the opening game and held her serve without any complications. Then, the Czechs powered through Fichman’s serve in the third game but the Mexican/Canadian duo were able to hang on until the Canadian suffered another break in the seventh game, enough for their opponents to secure the first set 6-4.

Ultimately, the Europeans showed why they are one of the best teams in the world. The Czechs claimed three breaks in the second set; they broke at the start of the second set and kept their lead right away to go up 2-0.

In the fifth game there was another break by the Czechs, who went up 4-1. After that game, Fichman was treated for a right ankle injury. The Czechs broke again in the seventh game to close out the match.

Krejcikova and Siniakova, who are the number one seeds in doubles at the AKRON WTA Finals, in 2018, have won three Grand Slams together. They were won at Roland Garros in 2018 and 2021 and at Wimbledon in 2018. Additionally, in 2018, they became the first team to win Roland Garros and Wimbledon, since Kim Clijsters and Ai Sugiyama won both titles in 2003.