Sakkari ends Sabalenka’s dream and advances to the semifinals 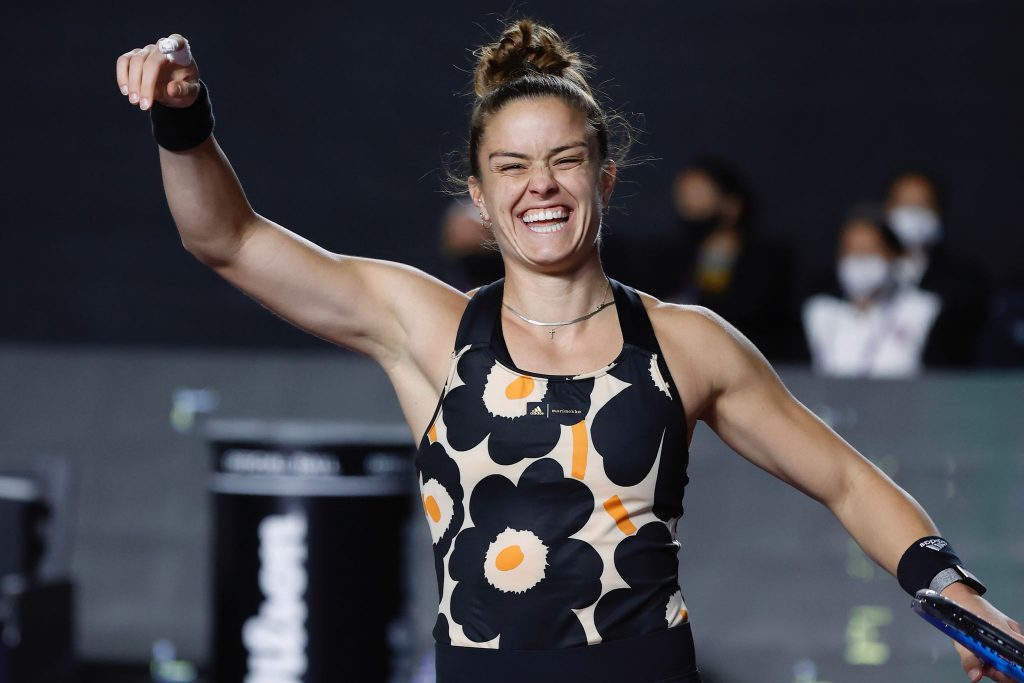 Guadalajara, Jalisco, November 15, 2021.- In a marathon match of 2 hours and 50 minutes, Maria Sakkari became the first Greek tennis player in history to qualify for the semifinals of the AKRON WTA Finals Guadalajara 2021, after defeating the favorite, Aryna Sabalenka, in three sets.

In front of a crowded Akron stadium, it was a magical atmosphere; Sakkari achieved the second victory of her career over the Belarusian, with a score of 7-6 (1), 6-7 (6), 6-3, to get second place in the Chichén Itzá group and set up a match against the Estonian Anett Kontaveit in the semifinals.

In a powerful fight from the start to finish, the game began with an exchange of breaks, the same thing that happened in games 8 and 9, for the set that went to a tiebreak. The tiebreaker started with one point on Sabalenka’s serve, but the Greek responded with winning seven back-to-back points including three aces to close out the first set.

In the second set, the first six games had many ups and downs between both players, but with the pressure on the Belarusian tennis player. In the seventh game, the first seed of the tournament was able to break the serve of her rival with an effective volley at the net to take the 4-3 lead. In the ninth game, Sabalenka let go of two set points on Sakkari’s serve, who managed to hold and break in the next game after an erratic shot from her opponent on a long ball. Later, at 6-5 on her serve, Aryna could not close the game, so that went to a second tiebreak, which resulted in a loud scream and where the Belarusian finally closed the set winning by 8-6 in the tiebreak.

In the third set, Sakkari took advantage of the inconsistency and countless errors by Sabalenka to start with a break, from which she immediately recovered by winning three games in a row. It seemed like Aryna was heading for a victory, but again her inconsistency appeared and she failed the next three games on her serve. Mentally defeated, Sabalenka hit three doubles faults in the last game and hit the ball out in the last game to lose the match.

The 56 total errors during the game, compared to 36 of her rival, were the key to making Sabalenka suffer in hersecond loss in the event; her serve did not help as she hit 19 double faults and only managed to win 62% of the points with her first serve, including 7 aces.

Sakkari on the other hand was much more consistent and took advantage of the important moments to achieve her second victory of the tournament. “I think this match was a roller coaster ride. I was like in a break, then she was awake, then a break again. It was just a matter of who was taking the risk. I think in the end, I just played with my heart and fought,” explained the Hellenic player.

“I knew it was going to be a very tough match for me. For the duel against Annett, I will not have that much time to rest, but I think my fitness level is one of the best on the tour. I will do everything possible to recover,” she added.

On the other hand, the dream of Sabalenka Finals run ended. She was the big fan favorite in this tournament; she will end her season as the No. 2 ranked in the WTA rankings just behind the Australian Ashleigh Barty.

Sabalenka said, “I had many opportunities and I just let them go. But, this was the best season of my career. Today, I had a difficult match, and I give a million thanks to the fans for their support throughout the week, the love they gave me was incredible.