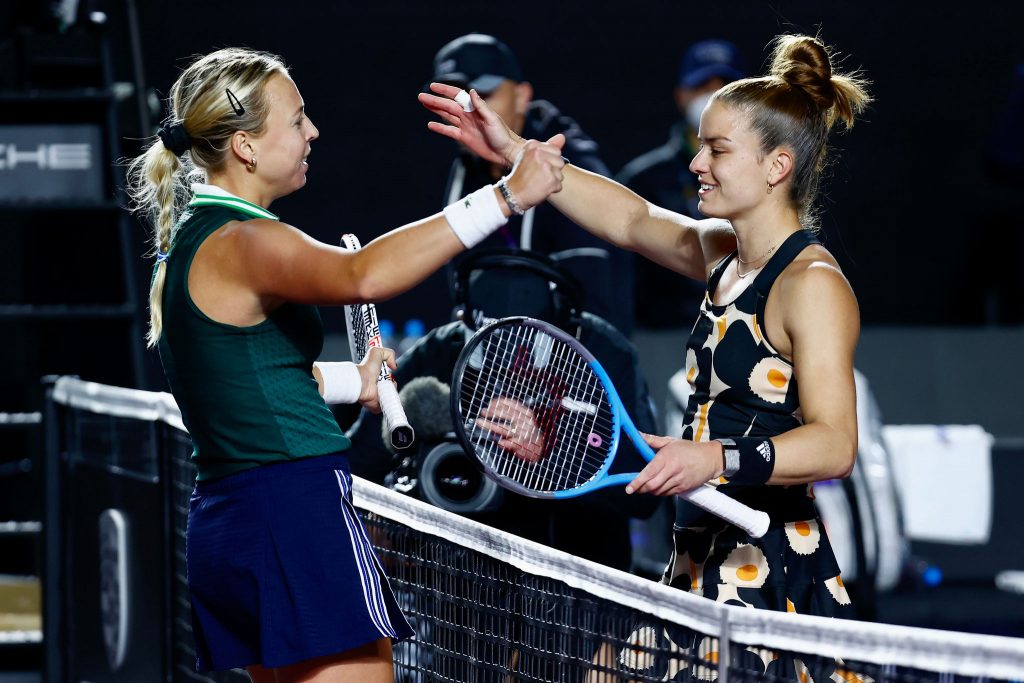 Guadalajara, Jalisco, November 16, 2021.- It is a very difficult match up for the Greek Maria Sakkari and the Estonian Anett Kontaveit, who will face each other in the second semifinal of the AKRON WTA Finals Guadalajara 2021 taking place at the Pan American Tennis Complex.

Kontaveit, the winner of the Teotihuacán group and Sakkari, second place of the Chichén Itzá group, have a history of very close matches. Throughout their career, they have played 11 times where the Greek tennis player leads their head-to-head 6-5; they have crossed paths four times this season.

In 2021, Sakkari defeated Kontaveit in the second round in Madrid on clay and in the first round of the Tokyo Olympics on hard court; Kontaveit won the matches in the semifinals in Melbourne and most recently, in the final of the Ostrava tournament, both on hard court.

On hard courts, like the one they will compete on at the Akron Stadium in Zapopan, the eight-game head-to-head is also even, with four wins each per side. The only time they played a three-set match was at the Melbourne 500 Grampians Trophy, where Kontaveit won.

This will be the seventh semifinal of the year for Kontaveit who is undefeated in this round and still does not know what it is to lose (6-0). As for Sakkari, she will be playing in her eighth semifinal of 2021, with win/loss record of 1-6 in all seven matches.

In the WTA ranking, the Greek is ranked No. 6 in the world, while Kontaveit is No. 8. Both are set to be ranked higher at the end of the WTA Final; Sakkari aims to close the year as world No. 4, while Kontaveit could finish No.6. Both players reached the semifinal match with a 2-1 record in the round robin.

Kontaveit won her first two matches against the Czech Barbora Krejcikova and then fell to Spain’s Garbiñe Muguruza.

Among the four semifinalists, the Estonian is the leader this season in games won on hard courts with 38, and in this tournament, she also has the highest percentage in points won with her first serve with 69.2% of games won with a 92.9% first serve percentage.

On the contrary, Sakkari has the lowest percentages on her serve: she has the highest number of double faults with 17 and the fewest number of aces with only 11 in the three matches she played.

Kontaveit’s record this season is four titles (Transylvania, Moscow, Ostrava and Cleveland), and made the finals in Eastbourne and Melbourne. For Sakkari, she reached the final in Ostrava, and the semifinals in Moscow, US Open, Roland Garros, Miami, Melbourne, Abu Dhabi; she is also the WTA leader in victories over top 10 players, with nine total.