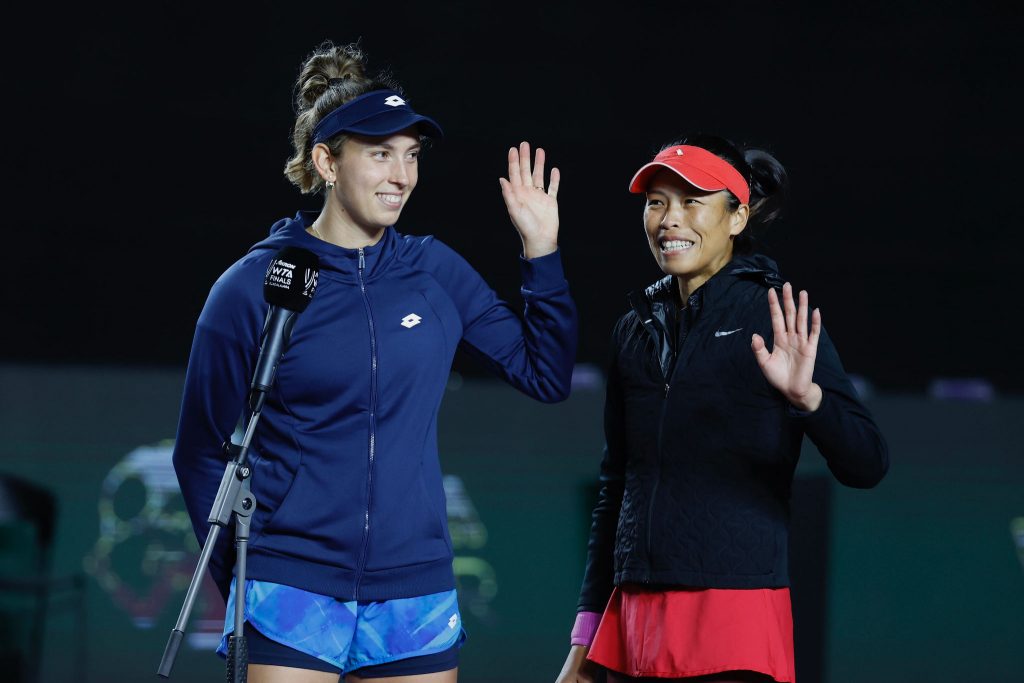 Guadalajara, Jalisco, November 16, 2021.- Hsieh Su-Wei, from Chinese Taipei, and her partner, Elise Mertens from Belgium, the No. 4 seeds, will play in the final of the AKRON WTA Finals after winning the battle against Japan’s Shuko Aoyama and Ena Shibahara.

In the last match of the semifinal’s day held in a cold stadium Akron, the pair Su-Wei and Mertens won 6-2, 6-2, in 1 hour and 7 minutes over the number two seeds in the tournament.

In the third game of the first set, Aoyama lost her serve, while Shibahara was broken in the fifth game, to easily deliver the first set.

In the second set, the tone of the match did not change; Ena Shibahara had a 40-0 advantage on her serve, but she failed to close it. The Japanese continued to go down on the scoreboard.

Despite this, they bounced back and got the break off Mertens serve to tie the set.

However, on the next game, the Japanese debacle began, which was reflected with two breaks on Shuko Aoyama, which lead to Su-Wei closing the match on her serve.

This was Mertens and Su-Wei’s third victory over their opponents, most recently in the semifinals of Wimbledon and Indian Wells, where they won the titles.

On the other hand, Elise Mertens and Hsieh Su-Wei will play against the Czech’s Barbora Krejcikova and Katerina Siniakova, in a dream dual between the four best doubles players in the world today.

As for Aoyama and Shibahara, they came to the event as one of the best teams in the world this season after winning 5 titles in 21 tournaments: Abu Dhabi, Tarra Valley Classic, Miami, Eastbourne, and Cleveland. Unfortunately, this time they failed to qualify for their sixth final in the year.