The Billie Jean King Trophy is in Guadalajara 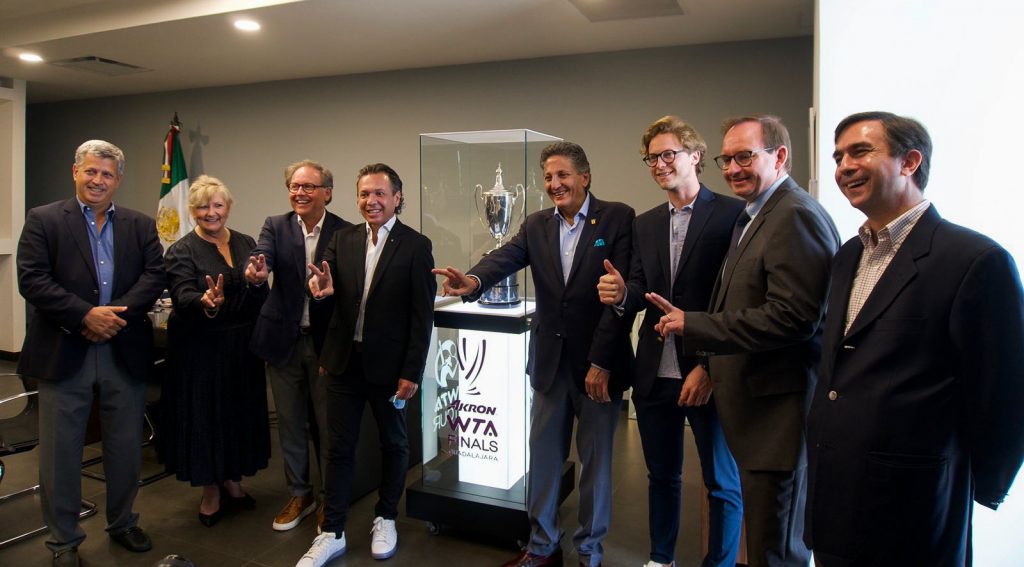 Guadalajara, Jal., November 2021.- Just a few days away from the start of #AKRONWTA Finals, Guadalajara is ready to host the players at a tournament that many consider to be the “fifth Grand Slam.”  Until then, the Billie Jean King Trophy – which is already in Mexico – has toured several local clubs in the country.

Gustavo Santoscoy, Director of the #AKRONWTA Finals, announced the stops that were included in the trophy’s route, allowing tennis fans to be able to see one of the most coveted pieces on the WTA tour.

On Wednesday, October 27th, the trophy visited the municipality of Zapopan. On Thursday, the 28th, it was displayed at the Guadalajara Country Club, on Friday, the 29th, at the Colina Club, Saturday, the 30th, at the Andares, and on Sunday the 31st, at the Landmark.

On November 1st, the trophy arrived at AKRON and on November 2nd, at Atlas Colomos. Lastly, on November 6th, the trophy will arrive at the tournament headquarters, where it will stay until meeting the new champion.

The one-of-a-kind trophy is delivered to the winner of the tournament and closes the 2021 WTA season; it is engraved with the name of each champion, every year.

A replica of the trophy is displayed in the homes of players such as Serena Williams, Kim Clijsters, Caroline Wozniacki, Martina Hingis, Steffi Graf, Monica Seles, Maria Sharapova, and Martina Navratilova, among many others.

“With the arrival of the trophy, we have announced to the world that Guadalajara is ready for the #AKRONWTA Finals,” Santoscoy said.

The organization has been going full speed ahead with the construction of the stadium at 80 percent and soon, it will be fully complete, awaiting the arrival of the players.

Regarding the ticket sales, the response has been positive; the tickets for the night sessions are practically sold out and as for the afternoon sessions, there are still some tickets available.